Improvising is a subject that's vague and seemingly intangible to many. In this lesson I'll show you how focussing not so much on the tons of different notes, but rather on the rhythm aspect of playing is a great way to break this alluring skill down to comprehension - and then build it right back up. Brick by brick.

This week we'll get in to the very foundation of how to improvise. Might very well not be the angle you'd expect to tackle it from!

video lesson below the text

I can play chords, sure, but just laying 'em down on each chord change get's boring. How can I make my playing more interesting. What do I play in between those chords.

I've struggled with this for a very long time too. In fact, I am still learning (as we all should be forever).

Rhythms - the origin of grooves, patterns, licks, fills and solos.

I think we can all agree that playing chords - providing the bed of harmony - along with the changes of a song, already sounds quite cool and full, especially when one has grasped the concept of coloring with extensions and is proficient with the basics of patterns to add some groove to his/her playing - how those chords are played.

However, I think most of you will also agree that it is what is played in between them - the alternations in our piano playing - that separates the players from the fiddlers.

Important to realise when embarking upon this embellishment journey, first and foremost, is that timing is everything.

"Fills" (something "in between" chords, whether an alternative groove, riff, lick or whatever) can all be let back to patterns - which as Piano Hackers know, are derived from rhythms. So to deconstruct this, that's our foundation - what we should focus on first.

This might sound counter-intuitive to what you think, since most of my students ask me WHICH notes to play. In stead you should first be focussing on HOW to play them.
To learn this we do however have to use a note, so for this example and exercise, we'll use "c." Easy.

On and between the main groove.

When you are skilled at playing basic patterns like this eighth beat groove below, you have a sense of where the beat falls. 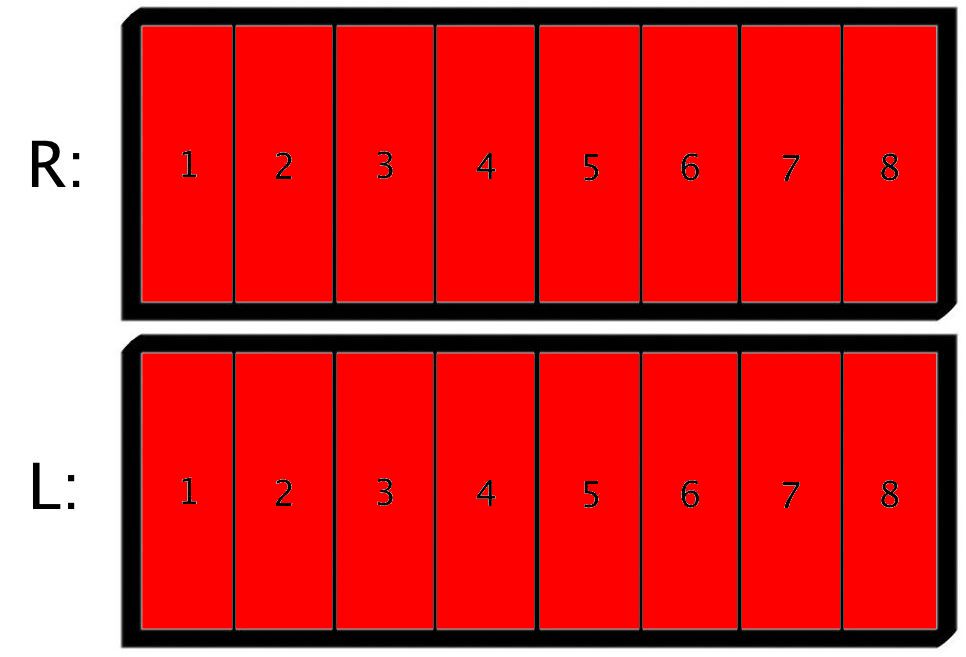 So when we'd use this simple chord progression in F

And play all those eights, it could sound like this (as an added bonus exercise, I highly recommend playing the eighths grid on an alternative beat or song of your choosing)

Next let's strip it down to quarters with the left hand, while the right keeps playing those eights.

Now, if we'd add the 16ths to our options, strip down the right hand to the before mentioned note "c" and we'd start playing SOME of those accents (eights and sixteenths), but leaving others open, we could get to something like this.
(to fill it up, you could play full chords with left, or, if that's too tricky, just keep playing the roots).

See where we're getting at? How about that, a "solo" with just one note. Do note the importance of the dynamics here too!

Note choice - Filling it up.

So obviously, there's the matter of the note choice - the main burning question from most of you that have been asking me this question a million times in the first place. Well, now that we've touched this more important aspect of rhythm first, I guess we can start adding.

The first step in doing this is just dead simple (however, don't be the fool that underestimates the power of simplicity): use note(s) from the chords you are playing.
Let me show you how cool this can already sound, when I use that same "c" (see that this was a deliberate choice, it being a chord note on all those chords we are playing?) and add an alternative note from each main chord to my optional notes.

Yes I get it, you want to be sounding like Oscar Peterson, ramming out tons of different notes in your fills.
But here's the thing: it's so super important to realise that this is just expanding upon this very idea. ALL fills come from this basic rhythmic approach idea - which accents do you play, and which do you leave open. Note choice - dare I say it - is secondary.

Although it's quite possible to sound awesome with just one or two notes - important note: it's WAY cooler to play in the groove with fewer notes, than to stutter and stammer with a lot of notes. Took me a few years to realise this - you might want to fill it up more once you're comfortably grooving with fewer notes.

To do so, start experimenting by adding one concept note at a time.

Golden tip: only add a new concept note when you can play something cool in time, with the previous set of notes (go to two notes only after you can groove with one, add a third only after you're cool with two notes).

I'll get more into options to choose your notes from and how you can combine them with standard licks/patterns to sound even more cool, in a next post.
Have fun and let me know how you're doing -and if- what you're struggling with!

Handout with images as per used in the tutorial and text explanation, audio only and MIDI files (4x - all improvisation versions) available for Premium Couturians.

The origin of licks, riffs and fills | Improvisation 101

Premium Couturians can find the "Deluxe" version of this lesson, including the following downloads:

Or get all that and the video download included with the tutorial pack.

Founder of Piano Couture, Piano Lingo and creator of the Hack the Piano method. Coen is a musician, reader, writer, web-designer, eater and traveler. Find him at CoenModder.com

A Free Intro Course to Playing Piano by Chords